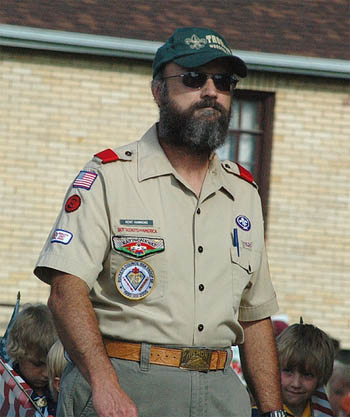 Lincoln, NE (Associated Press) A 45 year-old Lincoln man and Boy Scout Troop Leader faces sex charges, adding to the frightening national trend whereby pillars of the community let down those who once trusted them.

Lowell Byrd, Leader of Pack 396, faces charges he made last month on his credit card for adult videotapes via an online purchase from an out of state merchant. Byrd also faces charges totalling over $120 for an apparent three hour visit to The Oval Office, a new gentlemen's club in downtown Lincoln.

The charges were discovered by mistake, in fact, by a neighbor of Byrd's whose address is one number different than his, according to local police reports. The neighbor, Louise Bynum, 72, often receives Byrd's mail and usually takes it to his house immediately. Bynum, however, has a credit card issued by the same company that Byrd used for the illicit charges, and opened his monthly statement in error.

That error, however, was enough to cause Bynum to alert authorities of the charges that indicated aberrant behavior. "He faces these charges, charges that he made, in the face of his duties as a trusted leader of our young men of whom he is in charge when he is leading them," stated Bynum.

"He can pay the charges if he made them, or deny any knowledge and dispute that with his credit card company," stated Sargeant D.S. McMillan of the Lincoln Police Department. "At this point, though, it is not a police matter," McMillan said.

Since 1990, sixty-one Boy Scout Troop leaders across the nation have been relieved of their duties due to various criminal and sexual activities.